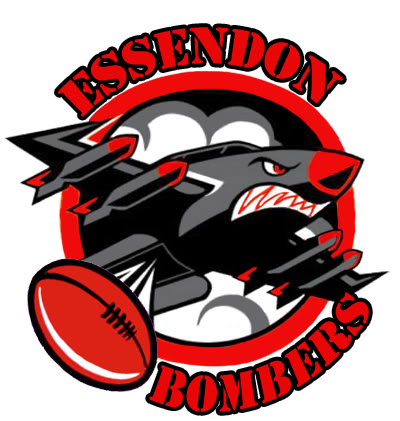 Ok, I have been reading a fair bit about Momentum. Both positive and negative. Let us look at what that means.

In modern day footy the term momentum is used a lot. Is it right to use this word to describe a footy match or part of one? The answer is yes, of course. But what is Momentum. Let's examine further.

One way to think about it is this. Every game has its own inherent energy. When the game is going your way the players can access this energy. Suddenly, you are in the zone. Every decision is paying off. Your skills are elite. Goals are sailing through from every angle. Tackles are being applied successfully; an accurate kick or mark, winning the hard ball and creating pressure, simple self-belief in your teammates and kicking the goals when it matters. The cheering crowd can boost a player. All of these provide positive momentum.

You, the fan, also experience this to a certain degree. How good do you feel when the team is playing well? When Joe kicks that long bomb from outside fifty to start the game, you are off your chair, arms pumping. “YEAH,” you yell. That's your positive momentum kicking in.

This same inherent energy can be lost as well. Initially when falling into negative momentum players tend to raise their energy output. They actually work harder. However, the players tend to tire more quickly because of this. They become more desperate and take risks. This, then, affects skill. "We couldn't hit a target!" More errors start to creep in feeding their opponents’ self-belief. "We turned it over!" And then there is a loss of team cohesion. "We played as individuals!" If negative momentum goes on long enough a team can end up totally defeated, bereft of belief, exhausted.

Again, you, the fan, also feel this at the end of the game. Remember the one point loss to Sydney? That’s our negative momentum. But as bad as it is for us, how much worse is it for our boys? They did everything right for most of the game only to fall short at the very end. This is where footy criticism gets out of line. When commentators and fans saw our defeated team walk off emotionally and physically spent, what did they declare? “They did not come to play” or “they ran out of legs”. “They are not fit enough”. Another that misses the mark, "Their lack of effort was pathetic." What? 22 professional sportsmen, after weeks and months of training, decide unilaterally to ignore the coaches, forsake personal pride and let their mates, club and fans down and not bother to try so hard that week? Poppycock!

YES! Momentum is a thing. It is a force to be reckoned with. You can't bargain with it. You can't reason with it and the weird thing about momentum is it can swing either way, for or against you. Momentum, in the modern game of footy at the right time, can win matches. Each side gains and loses momentum many times in a game. It's who has that momentum at the end who determines our winners. If you can build a big enough lead when you lose momentum you can still finish the game as winners. However, if you have been struggling the whole game but you have stayed close, a small momentum shift at the end can bring you home as winners as well. 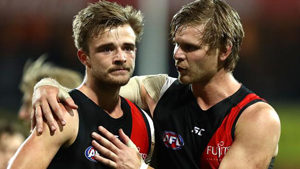 Momentum can swing in the blink of an eye. For example let’s look at that Essendon v Sydney match and the last ten minutes of play. The Dons had the momentum at that point and when they scored, it put them 19 points up. They looked to be home and the four points were theirs. With five minutes left on the clock, they went defensive to try and keep the lead and to deny Sydney the use of the ball. This was a mistake, a very big mistake. To Sydney it looked like the bombers had stopped. They weren't attacking. They weren't pushing forward. Sensing that shift, the Swans attacked hard and held nothing back. After all, they were already behind. They had nothing to lose. The result was, they got a turnover and scored from it. Not thinking too much about it, the Dons again won the ball but stayed defensive. Again, Sydney got the turnover and scored a behind and then a goal. Only three minutes had gone by and suddenly the Dons’ lead of 19 was cut to six. The Swans are attacking furiously and the Dons are hanging on by the skin of their teeth. Sydney gets another behind. The lead now down to five points and with about 30 seconds left on the clock, Sydney, with the momentum now behind them, win the ball back from a bad kick in and scramble the ball forward and a mark is taken at the top of the square. The siren goes, the goal is kicked and the Swans win by a point.

So, ask yourselves why. Why did this happen? When the Dons were attacking they were creating positive momentum. But that changed when they went defensive to try and shut out the Swans and they lost momentum because of it.

A final couple of points to think about, momentum is a great exaggerator of feelings and emotions.

The feeling engendered by positive momentum is OPTIMISM.
Everything seems good about winners. Their skills are good. Their game plan works. They are well coached. You, the fan, are upbeat. "How good were our boys today!"

The feeling engendered by negative momentum is PESSIMISM.
It descends on a defeated club like a fog. They are not fit enough. The game plan did not work. Their skills are poor. They did not come to play. They lacked effort.

It is absolutely vital that you come switched on to play. All eighteen teams know this. That’s why they study each others game plans and running patterns to work out best how to stop their opponents. When you get right down to it, statistics can be nothing and everything. Think about it for a moment. How is it that one team can win the contested ball one week and lose the count the next week and still win both games? How is it that they can lose the inside fifty count one week and win it the next week but lose both matches? You could do your head in trying to sort it all out. So, why does this happen?

Any team can beat any other team. That is the nature of our game. That is why there are upsets. That is why sometimes, 17th can beat 2nd or 15th can beat 1st. When you look up this word and study it, when you read about it and learn all there is to know about it, then you will understand why when two or three good weeks resulting in big wins can suddenly turn to ashes. When you go down in a screaming heap wondering what just happened. Football can be summed up in one word. That word is MOMENTUM.

Momentum explains so much about footy.

I challenge you all. Look it up. Study it. Learn about it. Read about it. I dare you. Believe me when you do, it will open your eyes to a different way of looking at games. Don't get me wrong here. The losses will still hurt and the wins will still be just as good. But you will understand how games unfold. 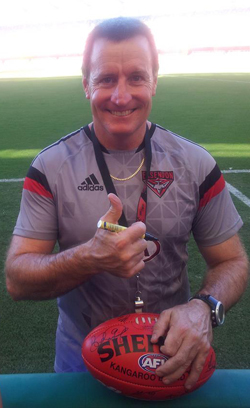